Some of you were interested in hearing about our trip in, from Chilliwack to Telegraph Creek. It was quite uneventful, but we will share a little bit about it with you!

The day before our departure we managed to load everything, we assumed and thought we would need, into our van, the work truck, and our parents’ horse trailer. This made for a smooth departure the following morning, on Monday. With alternating drivers and naps we were able to make it to Cache Creek for lunch, in the Husky Truck Stop parking lot, and then on to Prince George. We stayed at Josh’s sister(Chelsea) and brother-in-law’s(Dale) place for the night. It was nice getting a chance to visit.

The next day we started out fresh and ready to make the next leg of the journey, hitting Smithers for lunch break and a nap (by Josh) on the field of a school. The kids enjoyed the playground and had lots of time to run around and burn off all of their energy☺ A short way up the road from there, at Kitwanga, is where we headed North, and where civilization really started to thin out. From there it was to Meziadin Junction and up through the mountains to Bell 2, where we stayed the night. Bell 2 is basically just a lodge in the middle of nowhere. It is like a little hamlet with chalets, camping, and even a covered hot tub. It also serves as a base for heli-skiing. 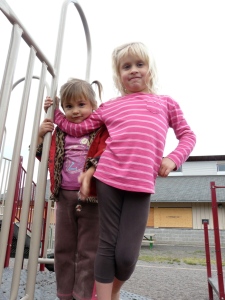 Kids on the playground in Smithers; Aliz chilling in the field with daddy 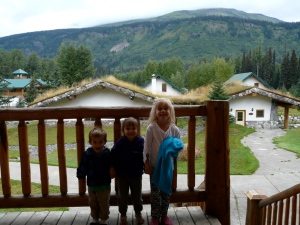 Bell 2 hot tub, kids on the balcony of our chalet, and the main lodge(below)

Our last leg of the journey proved to be the most exciting. Stopping in Iskut (the southernmost point of the Whitehorse Diocese) by late morning we met up with the Pastoral Administrator there, Rob. After a short visit we made our way up to Dease Lake, where we found another school playground and stopped for lunch. The kids were starting to get very anxious and excited to be getting close to the end of the road trip. Maybe we adults were too☺

The final part of the drive was the most scenic. It’s hard to believe that the fall colours were already starting to show on the trees, even though it was still August. The drive in took about 2 hours, the road stretching straight through the countryside at first and then winding down into the Stikine River valley, also known as BC’s Grand Canyon. At one point the road narrows out along a ridge and then hairpin turns down into the ravine and across the river, then climbs back up a steep section of road (which you can tell has been washed out before) dropping off to the river on the one side. I don’t mean to make it sound scary yet it is very awe-inspiring. Unfortunately we were not able to get very many good pictures on the way in, so we are hoping to post some more after we make our trip to Whitehorse at the end of the month. We pulled in to Telegraph Creek late in the afternoon, but decided to leave the unpacking until the following day.

Highway from Dease Lake to Telegraph Creek [112 kms] (above pictures)

One thought on “Our Trip”