“I came to bring to bring fire to the earth… I came, not to bring peace, but rather division.”

These words of Jesus are intense. His words make clear the purpose he came for, to embody the all-devouring love of God who has a passion for us that doesn’t let us settle in mediocrity, but rather calls us to something greater. These words also speak a truth that sets aside any notion of compromise and coexistence with evil. The truth is that we are in a constant battle. And in order for there to be true peace and holiness there must be clarity in our lives, not compromise. There are two camps, not a third, one must win while the other loses! Jesus is the one who can bring clarity to our lives!

In today’s first reading(Jeremiah 38.4-6, 8-10) we hear about the prophet Jeremiah, a man who spoke clarity which he received from God. And he was hated for it! Jeremiah was amidst God’s Chosen people, the Israelites, and was sharing God’s word with them; that they would face destruction by the Babylonian empire because of their sins. However, the popular opinion of the people was that they needed to fight and that God would deliver them, as he had in the past from other oppressors and foes. And so they didn’t believe Jeremiah’s message. And this was even in a Theocoratic culture, a culture that widely recognized God. Jeremiah was hated for speaking God’s word to them.

Earlier in Jeremiah we hear the famous verse, “I know the plans I have for you… plans to prosper you and not to harm, plans to give you a future full of hope.” And Jeremiah stood in that truth. He stood against the popular opinion of his day and chose to stand uncompromising on God’s word and was hated for it, even being thrown into a cistern.

We also are called to stand, as Jeremiah did, uncompromising in the truth against all that is a lie in our world today. But how was Jeremiah able to stand amidst the culture of his day with such strength? He was consumed by this fire that Jesus speaks of in the Gospel; the devouring fire. This image of fire is important. Fire is powerful and transformative! It gives warmth and also consumes and destroys. When I think of fire I always think of forest fires. You can see the devastating effects of fire out of control, devouring everything in its path. As devastating as it is have you seen, years later, an area devastated by a forest fire? It is flourishing, space is made for new life and new growth; seeds that were unseen now take life and so are able to flourish. 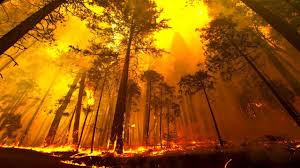 In the same way, in order to establish his kingdom on earth Jesus had to clear out, burn away, and destroy certain things; all that is false. And he seeks to do this in our hearts and our lives. Instead of settling for the ways of our fallen world he calls us to take a stand, as Jeremiah did, in his promise; not caring what others will think and not settling for what will make others “happy”, by our compromising (and this comes even in our own families), but only settling for the truth. It will most definitely never be the easy way, but it is this fire that will burn away all the underbrush and the dead wood in us that clings to this world and that will leave us open to grow and flourish in the all-devouring love and truth of God.

As we read from St.Paul’s letter to the Hebrews; “Consider Jesus who endured such hostility against himself from sinners, so that you may not grow weary or lose heart.”

So let us actively seek out His fire to consume our hearts, knowing the goodness and truth that it will bring!