We took our first trip outside Telegraph Creek, to Whitehorse, last week. Having celebrated confession and Mass on Sunday in the late afternoon, with Fr.Kieran and the community here, followed by a parish community supper we decided to head on our way north early in the morning so that we could make the trip in one day. It was fairly smooth sailing after departing at 5:45 am and only one sick stomach from the road out to Dease Lake. It was a beautiful day for traveling and we stopped in Teslin (just under 2 hours from Whitehorse) for a big stretch break and a late lunch at about 1 pm. 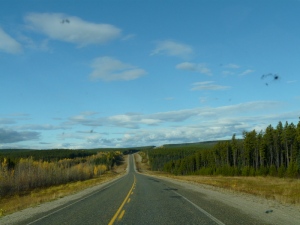 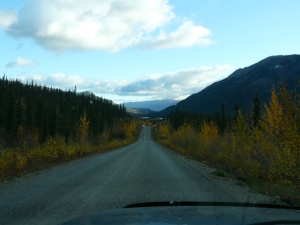 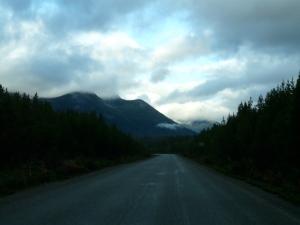 Views along the Stewart Cassiar Highway

We arrived in Whitehorse, just in time for supper (4:45 pm), to a warm welcome from our good friends Michel and Andrea Lefebvre and family. We stayed with them for the week, automatically doubling the occupancy of the house.☺

Our main reason for being in Whitehorse was for the Pastoral Study Days for the diocese; being nourished through a retreat with Fr.Edward Evanko, from Our Lady of Grace on Saltspring Island, and with some more pastoral and hands-on applications from Theresa Vogel, who had been pastoral administrator in Telegraph Creek before us. It was also a great opportunity to meet the other pastoral staff members and priests (and a seminarian) from around the diocese. With the children we were able to alternate our attendance so that one of us was able to attend the morning session and the other the afternoon, while we overlapped at mid-day with both of us, along with our kids, being able to attend Mass and lunch. This was a real treat, being able to attend Mass daily, as on a regular basis we are only able to celebrate Mass once a month in Telegraph Creek. During our last session, we were dealing with practicalities of missionary life. A comment was made that priests and religious have had years of pastoral preparation but us lay ministers we have had very little formal training. This person continued to say. “Frankly, I am so surprised Josh & Denise said yes to their role in Telegraph Creek!” Why did we say yes anyway? Because God put an invitation on our hearts we could not ignore. And despite the love pangs of being away from family, which is hard, we have a resounding sense of peace being in the North. Our time in Whitehorse at the pastoral study days gave us some practical tools for ministry but most of all we realized this whole new role for us can’t help but bring us to our knees in humility. Asking like little children to their Father, “What are we to do next?” Again, the words of Bishop Gary ring in our ears, “God does not always call the equipped, but equips the called.”

While in Whitehorse (on September 30th!) it snowed about 4-5 inches (and it had snowed about 3 inches in Telegraph Creek while we were away), but it had melted by the time we left. The kids had fun playing in the first snow fall of the year. We were able to get a lot of errands done that we needed to; a haircut for Denise, groceries, office supplies, banking, and even bought a new computer (which we are awaiting in the mail) as ours is getting so old that we can’t upgrade it anymore and I have a hard time even posting pictures to this blog (some days it works and others it doesn’t). 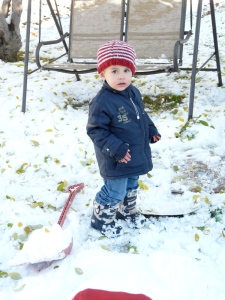 The kids playing in the back yard at the Lefebvre’s

We were also able to go to the Canada Games Centre(Whitehorse’s Rec Centre) and went swimming with the Lefebvre’s. Kateri, Gianna, and Isaiah were all able to go down the big slide with us and really enjoyed that! Isaiah had a blast pulling Aliz around in a floating fish(so sad that we forgot to bring the camera for a picture of that).

On the Friday we were able to join in the northern Holy Family Apostolate(HFA) meeting; praying the rosary, having silent time in front of the Blessed Sacrament, and reflecting on “Love… love… love, never counting the cost.” Afterwards we shared a potluck meal and met some of the families and people that are a part of the group. If we remember correctly, there was about 15 children present. Most families present were all in the same situation, living away from their family, so everyone especially the kids love being together. After being a part of the HFA in Vancouver/Langley for the last 6 years it was a real blessing to be able to see the workings of an offshoot from the same group in it’s northern form.

Denise & Andrea were able to attend a play put on by Fr.Edward Evanko(the same priest who had done our pastoral retreat) on the life of St.Damian of Molokai. It was a wonderful opportunity to learn more about the life of this amazing saint. 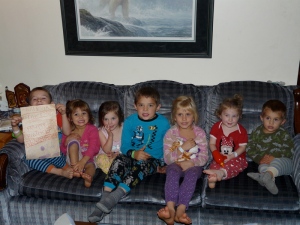 Movie night at the Lefebvre’s

It has some sadness ending our time there; to say good-bye and be heading back to the mission field. It filled us both with a bit of nervousness; that unknown and the gravity of our role in the community as the sole spiritual presence. Being around friends and fellow missionaries we found that we started to really enjoy the environment and the company. Packing a lunch for the road we were able to make it to Dease Lake by mid-afternoon before stopping for a bigger break at the school, only to end up locking our keys in the vehicle. Going to the closest house, to ask for a clothes hanger to ‘break in’ to our truck, we were very surprised to see one of the church members and her husband visiting these other very nice people. What are the odds? Fortunately one of the doors was only partly closed and with the extra help we were able to get the doors open within a minute or two. It definitely just affirmed for us the generosity and small-town feel within the community that we are now a part of. We were welcomed back to Telegraph Creek with blinding sunlight, just like when we came in for the first time. God is so good! 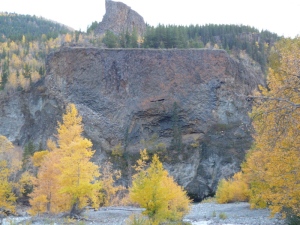 Can you see the eagle imprinted in the rock?

Although the whole trip took about 11 hours it didn’t really drag on at all. It felt like it went by rather quick, probably because there just isn’t too much in between.

So, back to life as usual, or not so usual, and here is a compilation of some of the most memorable events of this week. Being gone last week left us with quite a few things to catch up on, and so this post was kind of left in the dust☺

-We prayed the rosary as a community for the feast of Our Lady of the Rosary!
-Denise started working 2 hours a day at the school kitchen, cleaning and preparing lunches for the students as the school is in desperate need of a cook until Christmas.
-Kateri’s school went for a field trip to pick wild cranberries, so we all joined in the fun. It was actually a lot of bushwacking to get even just one coffee cup full of berries. The older students were making cranberry jelly on Friday so hopefully we’ll get to try☺ Again, we forgot to bring the camera on this one too☹
-Josh baked his first loaf of cinnamon raisin bread, and it was a huge hit!
-Josh was a chimney sweep for the first time in his life! Cleaning both the chimney in the house and the furnace and chimney in the church. 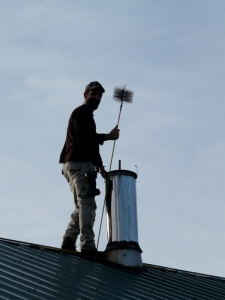 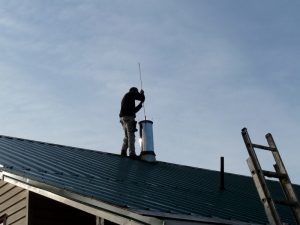 -We were delivered a fresh caught salmon to our door last Friday night by one of the families in our church community, so we had it for supper Saturday with French fries. Yummy!
– Sunday, we had our biggest congregation for a Communion Service yet, 15 wonderful people. Even two other children were there. Kateri, Gianna & Isaiah were so thrilled they couldn’t help but stare at them and whisper hello to each other from under the pews. Kateri was very excited to invite them over for cookies and to play! After the service most came over for tea and people just stayed! It was so wonderful to feel us all just really enjoying each other’s company. One of the parishioners who read today shared how moved she was to read Paul’s letter to the Phillipians. She was almost in tears. Josh affirmed that he noticed and was also touched by the way she read the passage. Another parishioner shared how the readings touched her as well. When everyone left, we couldn’t help but feel so thankful and a little giddy with how the spirit was moving! “I can do all things through him who brings me strength.” Phil. 4:13 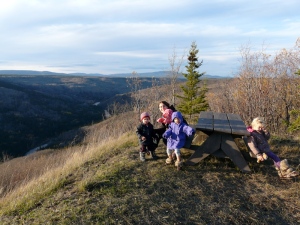 (above)Stikine River Provincial Park Rec Site to the northeast, (below) to the west 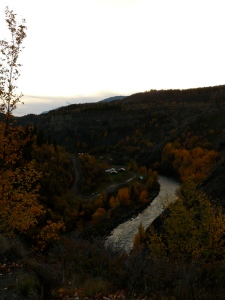 Just above the Tahltan River

3 thoughts on “Whitehorse & the latest scoop!”